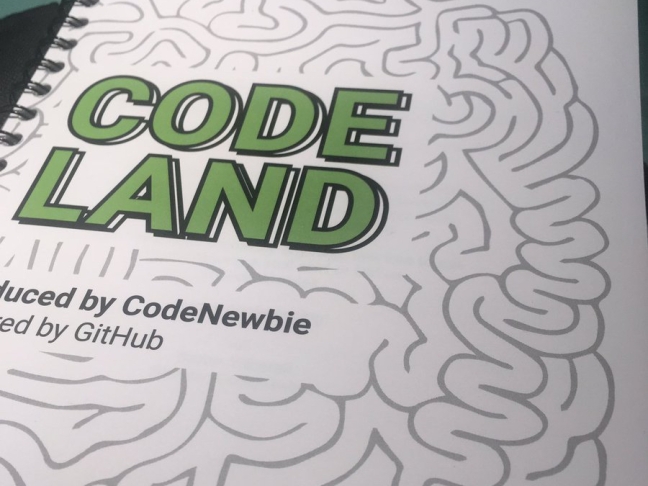 I had the privilege of attending Codeland Conf by Saron Yitbarek of CodeNewbie this past weekend in New York City and I was blown away.

First, I want to say that the conference was impeccably organized. Everything went so smoothly and the audience was so full of diverse attendees from all around the globe. To hear more on what goes into organizing a conference like Codeland, you should definitely check out the episode we did a few weeks ago with Saron on Greater Than Code! Not only did we talk about Codeland, but we also talked a lot about capitalism and creating inclusive spaces.

Secondly, if you have some time, I definitely recommend you go through the tweets under the #Codeland hashtag on Twitter. It was a trending topic for 10 hours in the United States on Friday, April 21st!

Day 1 of the conference included talks about health, education, city life, community, and art and gaming. Here are a few highlights:

Jessica Rudder gave a beautiful talk about learning to embrace failure from bugs in game development. “It turns out failure is actually an incredibly important part of learning,” she said.

Stephanie Nemeth showed us how to create art with a Raspberry Pi and wowed the audience by wearing one of her creations onstage! Audience members got to color her shirt with an app and it was awesome.

Greg Baugues‘ emotional talk, “Developers and Depression”, was so raw and real that it had audience members opening up about their own experiences under the #Codeland hashtag. One of those audience members was myself:

I had to admit this in January after my mom passed. You’re not alone. Seeing a therapist and starting DBT therapy next month. #Codeland https://t.co/qGTZu8LYZf

It was so refreshing to be in a place where the stigma of talking about the subjects of depression, anxiety, and ADHD was nonexistent.

And to wrap up Day 1, who didn’t love Scott Hanselman‘s keynote talk on JavaScript and The Rise of the New Virtual Machine? Not only is he brilliant, but if his career as a developer ever fails, (which it won’t), he totally has a backup gig doing standup comedy. That man is HILARIOUS.

I can’t wait for these talks to be published online for y’all to check out. Trust me, it’ll be worth it!

Day 2 started with workshops. There were ten to choose from and trust me when I say, that was a hard choice. I ended up taking the one titled, “Introduction to Git, GitHub, and the CLI && Git Into Ship Shape” with Eric Hollenberry. He was an amazing instructor and taught us how to make pixel art using GitHub, the terminal, and a text editor. Unfortunately, we ran out of time, but there’s a repo online that will walk you through the workshop until completion!

Katrina Owen was one of the instructors in that workshop and I was so happy that I got to catch up with her as well.

Unfortunately, after the workshops, I had to head home on a train to Pennsylvania. I missed the panel discussions and Bootcamp Battle session and talks that I heard were fantastic: Katrina on “Incognito Mentorship,” Free Code Camp’s Quincy Larson on “How to write technical blog posts that people will actually read,” and Nell Shamrell on “Open Source Governance 101: What it really takes to be an effective maintainer and contributor of an open source project.”

I will be sure to highlight them as they become available via video and add them to our “Favorite Talks” YouTube Channel, so if you aren’t subscribed now, I highly recommend you do so.

I will admit that I was a little shy during this conference even though it was SO MAJORLY WELCOMING AND INCLUSIVE! I have major regrets about not introducing myself to some of the people that I’ve interacted with online, like Scott, Quincy, and Nell, and it was really only the second conference that I’ve been to as an attendee.

There was one woman volunteering there named Kim Crayton that I kept thinking, “Man, I wish I could be her,” because she was just so full of positive energy and excitement. She interacted with us attendees and did her best to break us out of our shells by engaging us, amping us up, and getting us excited. She is a community engineer and the face behind @JrDevMentoring, which has a Slack channel to request access to (and I’ll be so doing shortly.)

In summary, I loved this conference. I did talk to some amazing people who I hope to keep in touch with and I have a lot of resources in my pocket to buckle down now and really get serious about learning how to code. I’m excited, scared, and skeptical that I can do it, but I’m going to try.

There was a very inspiring blog post that I kept re-reading over and over and over again on the train ride home called, “Why Learning to Code is So Damn Hard,” that is making me less scared to do the damn thing. If you can’t tell, I need all the help and love and support that I can get, so please, please show me some love and hold me up to my end of the “learning how to code” bargain.

My goal is to go back to Codeland next year with a vengeance. More experience. More self-confidence. And most of all, to make more friends!

Saron: Thank you again for putting on such a wonderful conference. I have admired you for years now, and I hope to become a more active participant during the weekly Twitter chats. I’m glad I had the courage to finally meet you in person — I’ll admit, it was intimidating! But you put on one hell of a conference, and thank you so much for having me.

Want to hear more?
SIGN UP FOR EMAIL UPDATES

Mandy Moore, also known around the Internets as @therubyrep, is a podcast production expert, mother of orange tabbies, and sucker for bad reality television. She adores her 7-year-old daughter, Reese’s peanut butter cups, and sitting around fire pits while listening to country music. She is a huge advocate for STEM education and women in technology.