From JS to JewelBots: an interview with Sara Chipps 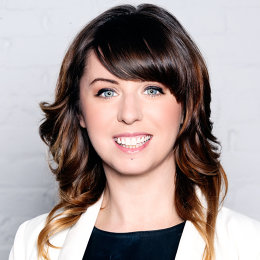 Often, we index our achievements in moments of time that told us who we were. The day I met Sara Chipps was a moment like that for me, one of those formative episodes that prefigures a lot of what followed in my programming life. I related to Sara in ways I never related to my technical colleagues or my grad school cohort, because she was a very feminine and fascinating programmer, one who commanded a respect and a competence that I felt I lacked. That relationship built a pretty fun friendship and inspired me to make code a considerable part of my work output and extracurricular projects.

I met Sara several years ago in her Javascript class for Girl Develop It, a non-profit I now contribute to as a Chapter Leader and volunteer. Thereafter, we co-founded a Nodebots meetup in New York with a few other hardware hobbyists. With a career strongly rooted in diversity and education via Girl Develop It and the Flatiron School, as well as mentorship and empowerment via The Levo League and About Feminism, Sara now dedicates her time to building a hardware company called JewelBots. And it is her singular ability to turn formative moments into fruitful projects that I wanted to profile here.

The following interview features a few questions with Sara Chipps:

Probably “student,” I am always learning new stuff, very energized by that.

Good question, the idea behind it is fostering a subculture that doesn’t exist right now; there are not a lot of tinkering tools for girls aimed at their interests. I think we’re trying to create world where tinkering is something that girls do to improve their toys and tools.

I was at a conference in Dublin (2012), and there was a woman named Emily Rose. Long-story-short, she used Javascript to explode a smoke machine that filled the room during her talk. I approached her afterward and said she was inspiring, and she gave me a bag of LEDs to light up and play with, and that’s what happened. Thereafter, I started tinkering myself.

I just think that I wanted to make a tool for girls pointed at their interests to inspire then to start coding. Initially, I was going to make a bracelet that changed color to match their clothes. We interviewed girls at middle schools to see what was actually interesting to them, and it seemed that they thought that idea was dumb. Based on their feedback, they’re into friendships and communicating with their friends.
The first pilot and test objects for the project were part of a Nodebots Day hack: a ring that read Twitter sentiment. The project grew to support the research concept.

Yeah, so we’re going into this with a hypothesis. When you get a Jewelbot you never have to code it, you can start communicating with your friends right away. Online, we post sample code and highlight showcase projects from girls making their Jewelbots more awesome, and then we inspire them to code more. It’s more like Minecraft, you progressively get 9-year-olds writing Java to make their Minecraft experience better and more engaging. And we’re trying to do the same thing.

Nodebots made me more comfortable with hardware, it was the first step. I made all the initial prototypes with Nodebots, it never would have happened without it.

I think people really like the instant gratification, often learning to code programs (like Hopscotch has done this well), the difference between physical computing and machine programming, it’s more having and end-game or goal that you can see. When you can align it with a student’s goal, like making a game or changing their jewelry, they feel like they’ll have a unique thing at the end, something tangible.

I think our biggest hope is that girls can stop thinking of engineering as something that’s not for them. If it makes a bunch of engineers great, it’s more about making them feel less like passive consumers and more about makers and creators of technology that can change the landscape in the future, or influence its development. 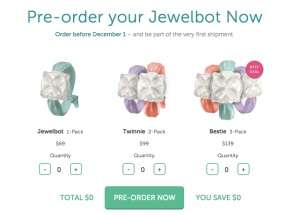 We just launched presales on our site, anyone who pre-orders now will be part of the first batch (part of the Kickstarter).

The design process for a website and product geared toward girls is interesting; our target demographic is 8-13 year-old girls. For the website, if you go to Seventeen Magazine or Teen Vogue, they’re all dark pink and green, it’s crazy. They’re doing research, they’re all doing the same thing, we decided to go with that too.

We picked the band colors because we liked them. Right now, we’re user testing the shape and style but then we’ll test colors!

Given time, I’d think of something more timeless, but what comes to mind is a Jeff Atwood quote: “Suck a little less every day.”

Keynoting RailsConf.
I don’t write Ruby, when I started coding, I never got into it because I was doing Microsoft and then went to Javascript, but I’d say it was a highlight of my career to have that privileged invite.

I try not to think that way; there’s nothing you can do about it, besides learn, and I’m all about learning.

Aurelia Moser is a creative coder in Brooklyn, New York. She makes maps and magic on the internet at Mozilla, co-coordinates the New York Chapter of Girl Develop It, and runs a radio show based on generative playlists and the semantic web. Find her @auremoser or http://algorhyth.ms/