I grew up with cornfields behind my house, so I’ve always associated those graceful stalks with Pennsylvania. However, it wasn’t until this year that I learned more about their biology, and how each of the silks becomes kernels of corn. It was necessary for me to understand the silk, because it was to become the focus of my latest art project.

The world is changing; Pennsylvania is getting hotter and wetter, with Philadelphia increasing in temperature faster than most cities. I had a conversation with Daniel Bader, a climate research analyst that I met through CUSP (Climate & Urban Systems Partnership). One of the disturbing things I learned was how weather was going to significantly change our crops. Yikes.

Corn is a staple in this state—how would it survive? What if corn could become sentient and communicate to its neighboring stalks? What kind of information would it transmit? I imagined corn waking up like the rest of us wondering whether to carry an umbrella or a big floppy hat. I started sketching corn stalks and imagined embedded electronics.

I knew I was going to need a microcontroller that had Wi-Fi access in order to pull weather data. Luckily I had a Particle Photon microcontroller on hand which is Arduino compatible and small enough to hide anywhere. The question is what I would do once I had the weather data.

As a wearable tech junkie, I had been reading up on fiber optics for skirts and other projects. One day thoughts of glowing fibers intercepted an image of corn silks, and I knew that was going to be the method of communication. I could illuminate those fibers with LEDs and cause a “whisper down the lane” effect with the silks changing color based on the next day’s weather forecast.

I usually keep stitchable Neopixel LEDs at my house, which not only do fab colors but are also chainable, allowing you to address them individually or as a group. Picture the dresses by CuteCircuit that create text and rainbow patterns. Those LEDs were the right idea, but I knew fiber optics would require a more traditional pointed LED shape. So, I ordered up some Neopixel LEDs that were through-hole mount, but still addressable.

I’m 60% artist and 40% hacker, so using web hooks to tap into weather data started to get complicated, despite having located code on Github from others. Then I remembered a recent discovery, IFTTT (IfThisThenThat), which is a site that allows you to connect devices and apps easy-peasy using “recipes”. Want your Hue lights to turn purple when it rains? This is the place for you! I started testing by creating a recipe that would trigger the Neopixels a certain color based on an email. It was great to see how one email could make LEDs yellow. IoT is so cool!

Once I had the Photon and six Neopixels playing well with that recipe, I moved onto weather. I was able to use IFTTT to trigger a blue LED for rain. This was harder to test because weather forecasts are updated either early in the morning or late at night, so I had to remind myself to go check my project at odd hours. After some successes, I had the code in a nice loop that had the six LEDs wiping colors once triggered. It was so easy, which is why I shouldn’t have trusted it.

I had created a color monster. I hadn’t allowed for an update, so basically the program would work only once and be stuck on the existing color from the last forecast. After much trial and error, I figured out I had to take out the loop that relied on a “do yellow unless rain and then do blue” and switch it for different cases using trigger functions through IFTTT. However, there was an advantage as I was able to have three options for weather—rain, clear and overcast. Now it could update naturally whenever pinged.

Of course the hardware was just part of the project; locating believable corn plants was another adventure entirely. If you Google corn plant you generally get the houseplant variety, not the edible one. Once found, I had to drill through the corn cobs in order to have room to insert a Neopixel with its heat-shrinked bundle of fiber optics attached. Luckily the center of the corn stalk ended up being like a pipe, so I was able to thread my silicone wire through one end and then have it lead out near the end of the plant. 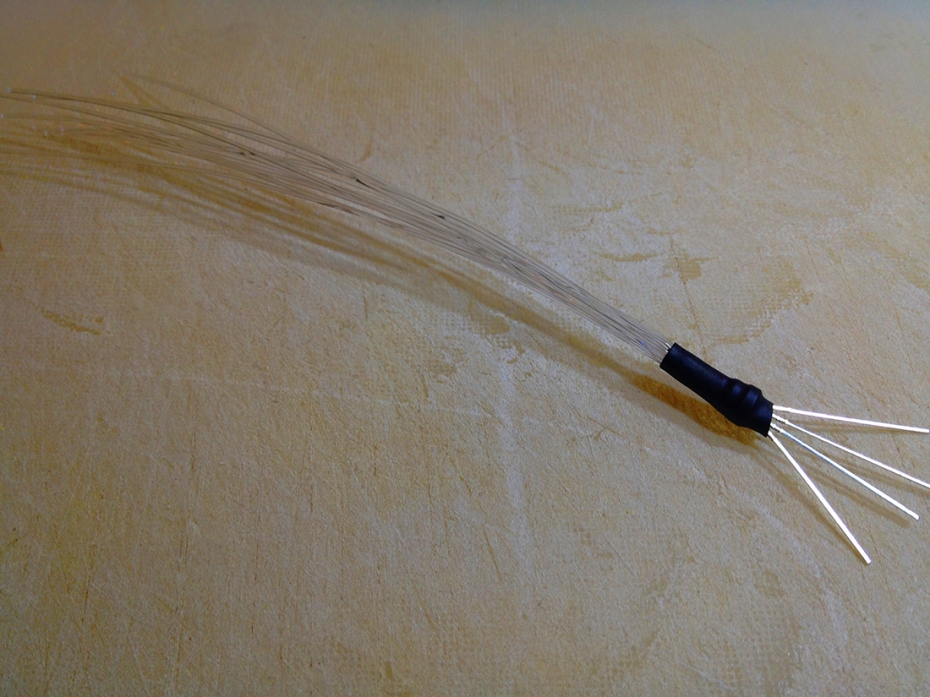 The rest of the project came together more easily. I was able to find carriage bolts and plywood squares for the base that allowed the art to be easily moved for exhibits. The breadboard and parts hide nicely in a box underneath dark brown burlap. The set-up just requires available Wi-Fi and an AC outlet.

CornEMO (Electronically Modified Organism) is currently installed in a publishing house window devoted to artists. Passersby have fun checking out the colors of the silk and understanding the connection to climate change. I actually found myself perfecting the colors of the installation one night when the publisher was closed. I was able to sit outside at a nearby café with my laptop and upload the new program all thanks to Wi-Fi. 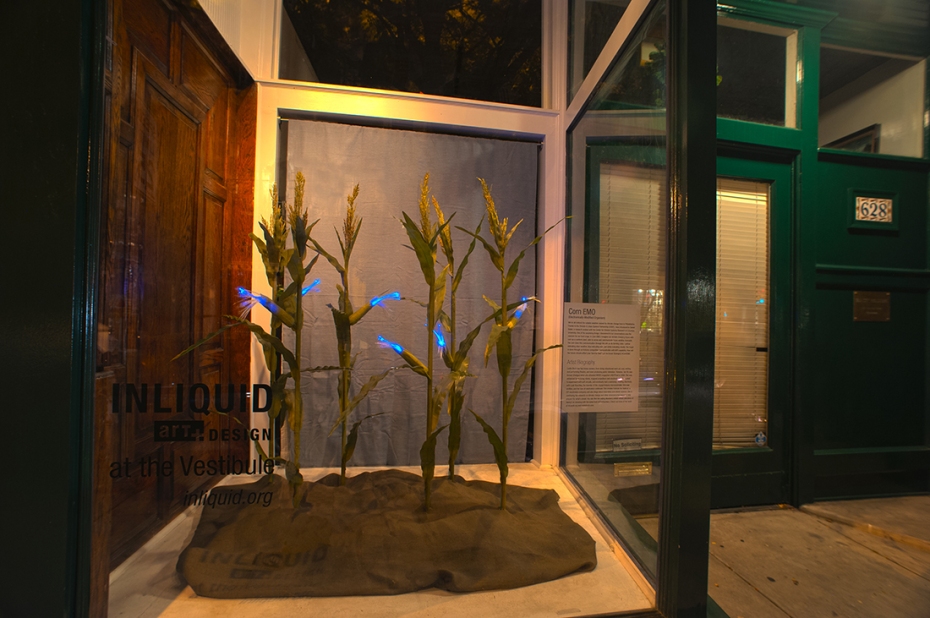 Whenever I touch hardware there is still a sense of amazement. Now I’m looking for ways to use Arduino that have meaning. Environmental issues are certainly my highest priority, whether I’m using tech for data visualization or data collection. At the same time, I’m troubled that my hardware love is also a cause of pollution and waste. It’s going to take all of us to keep watch on our natural resources, but I’m hoping there is also time to develop hardware that is more sustainable. I’m up for the challenge; let’s do this thing.

Leslie Birch is an artist and hacker researching the environment and using technology to share understanding and adaptation. Follow her @zengirl2.